The making of my Tomorrowland LedHat

Last weekend I went to Tomorrowland 2013. I got the ticket months ago, in February. Ever since, I had been thinking about building something to stand out, something involving LEDs and an Arduino. As usual, I only decided what to build the day before the festival! I went to the mall and found a hat in discount. This would become my Tomorrowland LedHat 🙂

The plan was to attach a bunch of LED strips and control them with an Arduino. Not only that, I wanted them to react to the music! A quick look through my electronic components collection made me wonder if I could do something with an LM324 op-amp. Le Goog pointed me into the direction of a movie by Afrotechmods. He showed a simple circuit to build an op-amp comparator. It filters the microphone input, amplifies it and compares the output voltage to a threshold. I quickly built this on my breadboard, added a potentiometer to set the sensitivity and voilà, I had a simple beat detector.

Next I attached the op-amp output to an analog input of an Arduino Mini Pro. Any Arduino would work, this was what I had laying around. It needed to fit in my hat, so my Arduinos Uno or Mega weren’t options. With 5V supplied to the op-amp, the maximum output I saw was about 3.8V. The analog pin translates a 0 to 5V input to an integer between 0 and 1024. Each loop the Arduino reads the pin value and compares it to a threshold. I chose 500 as the limit (about 2.5V).

The next step was controlling the LEDs. Attaching the LED strips directly to Arduino output pins isn’t a good idea. The Arduino can only handle that much amps. Furthermore my LED strips work on 12V, something the output pins can’t supply anyway. The ULN2003 Darlington array is built for this kind of applications. Supply 5V to one end and it will switch 12V on the other. It has 7 such gates and can sink a total of 500 mA, more than enough.

By the time I had everything tested thoroughly on a breadboard and soldered it up on perfboard, it was already late in the evening. While my girlfriend was sewing everything in my hat, I started coding. Luckily I didn’t have to start from scratch! I could recycle my Discotheque() code. Quite some things had to be rewritten though. The function had to be called based on microphone input and everything about the remote control had to go. Also the sequence of LEDs was different. My quadcopter didn’t use all ULN2003 pins. Now I did, so I had to program some new patterns. Patterns consist of different steps. Each step is a 7 bit integer. The binary number tells which LEDs should be on or off. Each time the function is called (ideally on the beat), it executes the next step. I repeat every pattern three times before it goes to the next one.

This is how it looks: 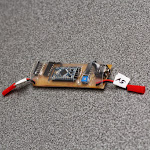 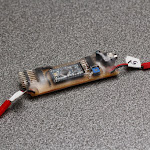 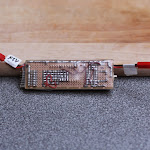 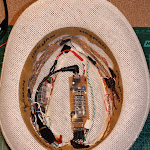 And here you can see me using it in Tomorrowland the next day:

I had the battery, a 2200 mAh 3S lipo, in my back pocket, with a wire running over my back to the hat. I had 4 batteries with me, with a total of 6600 mAh. I didn’t check in advance how much current the hat would need, but I ran it for about 3 hours and the battery still had 11.5V. A fully charged lipo has 12.6V and can be discharged to 9V maximum, so it can run PLENTY of hours on just one battery this size!

Considering the LedHat came from concept in my head to a product in just one day, it worked relatively well. But it can be improved considerably!

I’ve got a year before the next Tomorrowland festival, which I will most certainly attend!! Let’s see what I can come up with…